A Helmet for Kieron

When Kieron was a few months old, he started developing a flat spot on the back of his head from sleeping on his back. We and the doc kept an eye on it, hoping it would round out once he started sitting up. By the time his nine month checkup rolled around, it hadn’t improved, and we were referred to a cranial specialist. It was unlikely this would correct itself, and by the age of two, the fontanels all fuse and the head is the shape it will stay permanently. So we opted to get a helmet for Kieron. He wears it 23 1/2 hours a day for roughly four months, and is currently about half-way through.

At first, we were concerned about how he (and we) would adapt to it, but he got used to the helmet very quickly, and it’s become part of his personality. So far the results have been great, and there is already a very visible change. Plus, there’s the added bonus that since he is learning to walk, the helmet is quite functional and has spared Kieron a number of bumps and bruises. It also provides extra protection from the energetic and not-always-gentle older brother. 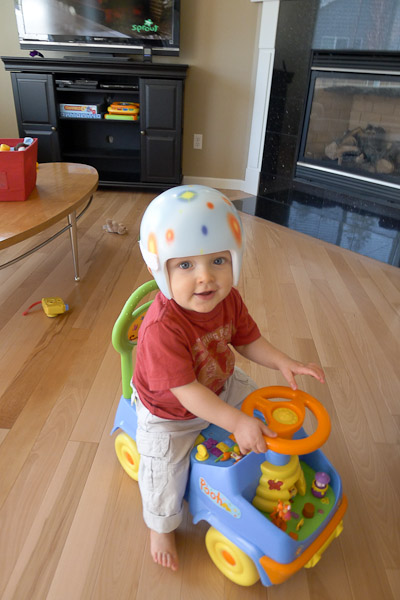 This entry was posted in kieron. Bookmark the permalink.