March 1st was Silas’ birthday. It’s difficult to believe a whole year has come and gone since the morning we checked in at the birthing center and announced “we’re here to have a baby!”

At one year old, Silas is a cheerful little guy. He’s pretty easy going, and generally happy. He likes to stick with Mommy, and lights up whenever Daddy or one of his brothers show up. He likes clapping and dancing to music, rolling cars along the ground, and helping Kieron in his kitchen. He loves bath time and eating. And speaking of eating, he likes almost everything. Fruits, veggies, meat, fish, grains – basically what we eat, he eats. Even some pretty strong flavors like marinated vegetables and saag paneer. Words he uses include: hey, mama, dada, a-eee (Avery), more, uh (uh-oh).

It’s especially cute to see Silas’ interaction with his brothers. Of course he thinks they’re both great. Kieron is starting to get a taste of sibling rivalry now that Silas isn’t just a baby anymore. Sometimes he’ll grab a toy from Silas, but he’s very protective. If he sees Silas start to do anything slightly dangerous (like reach for a cord or small toy), he immediately tells me or tries to stop him. With Avery at school most of the day, he is now elevated to “cool older brother” status, and he loves this role. When he comes home in the afternoon, he give Silas a special “hello,” and in return, Silas squeals and giggles. It’s so interesting to observe all the differences in their interactions with each other. Kieron is more of a peer to each of his brothers, while Silas and Avery have a different dynamic with five years between them.

Silas had his well baby check last week. He hasn’t grown much – 19lbs, 3oz, 29″, head is 17.52″. He’s gained less than a pound in the last three months, and hasn’t stretched out any, so he’s dropped on the growth charts. No concern there though, he’s an active little guy.

A few days before his birthday, Silas took his first steps. We all got to see it! We were all in the playroom when he just let go of the ottoman and took about five steps before dropping down to his knees. He’s still not walking everywhere yet, but practices. He prefers to do it on his own, rather than with help from Mommy or Daddy. Here he is balancing on the morning of his birthday. 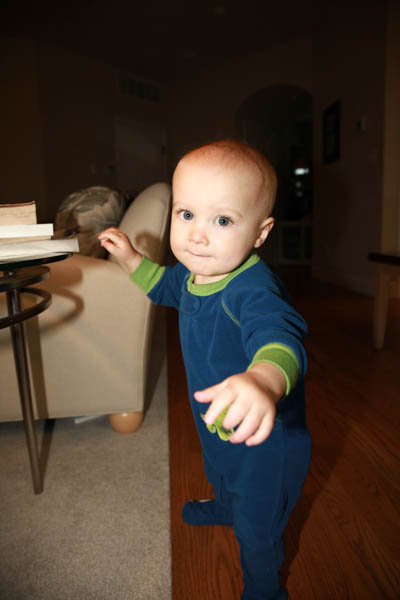 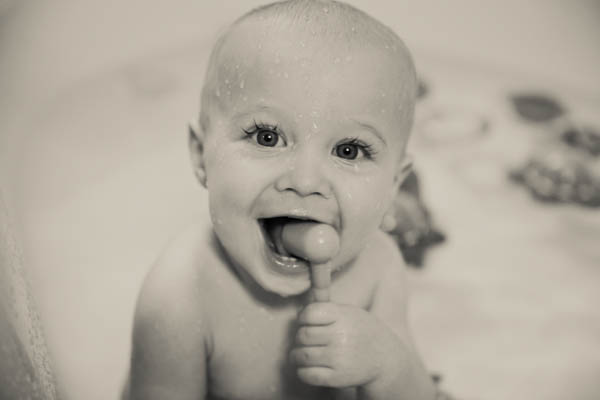 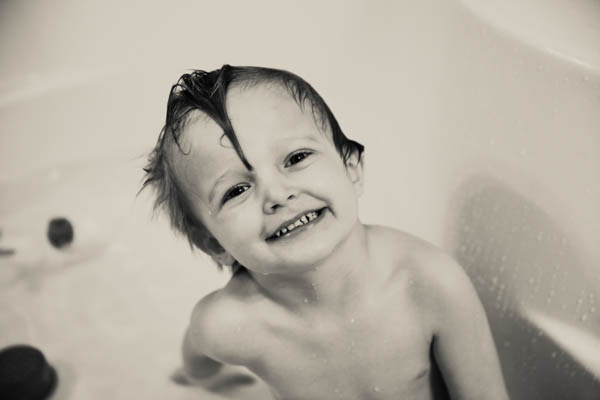 Here they are horsing around in the kitchen. 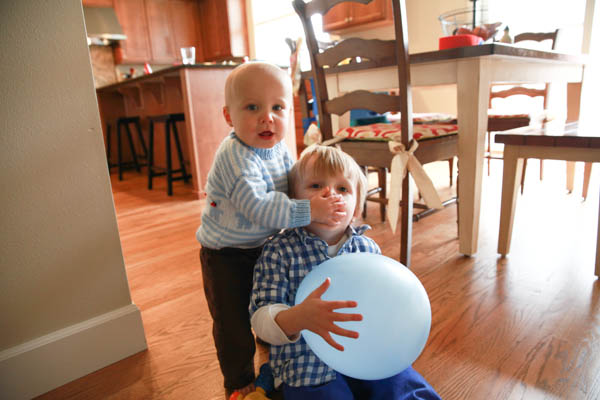 Silas likes to love on his big brothers. Here he is giving Kieron a kiss (and a nose honk)! 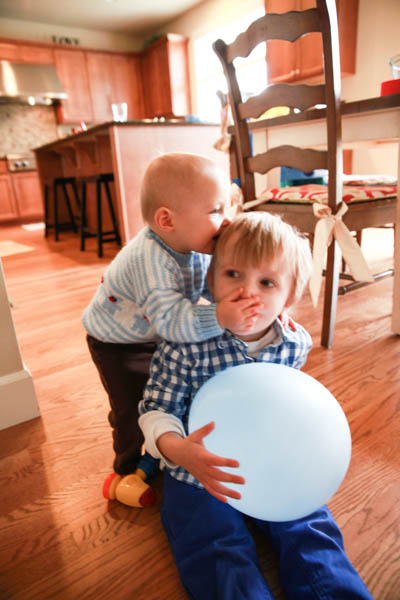 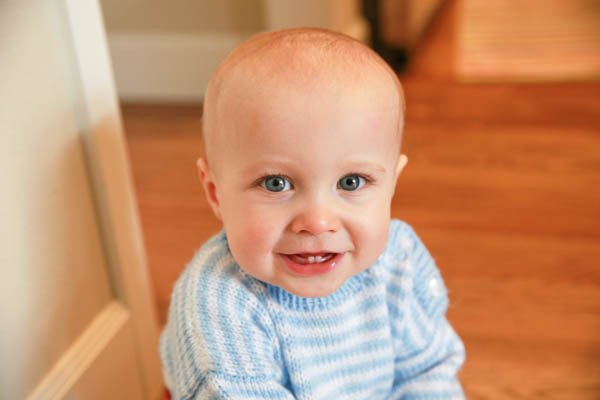 Checking out his birthday balloons with Mark 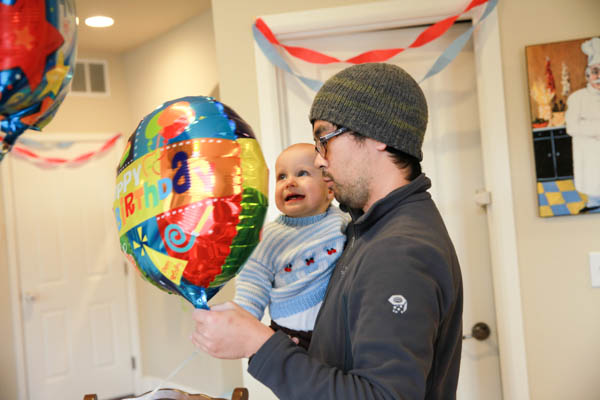 He prefers to push his little car sideways because it’s easier to control that way. It tips easily that way though. 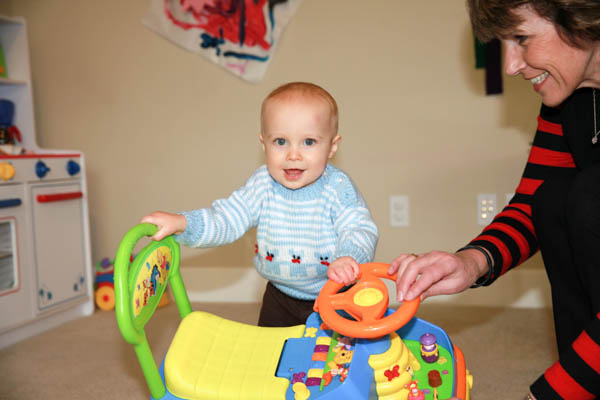 Waiting for his cupcakes, “why is everyone singing to me?” 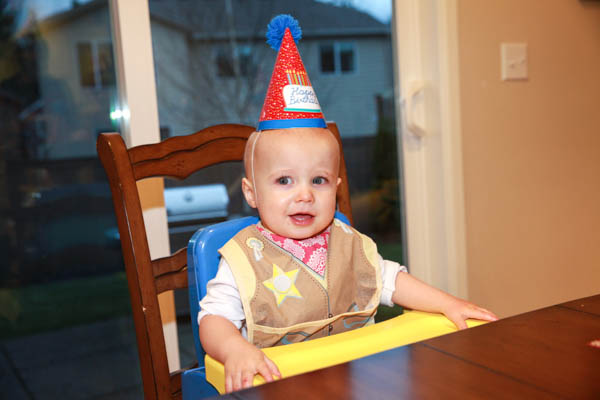 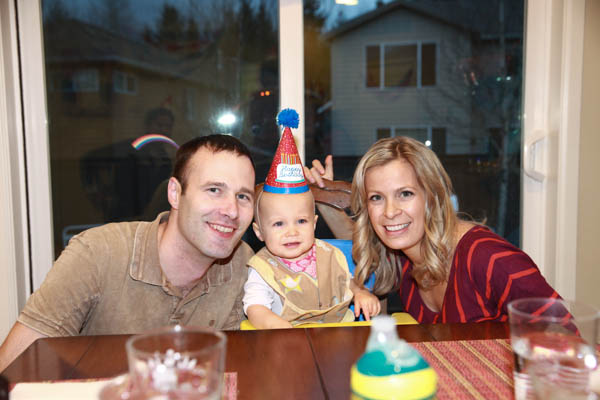 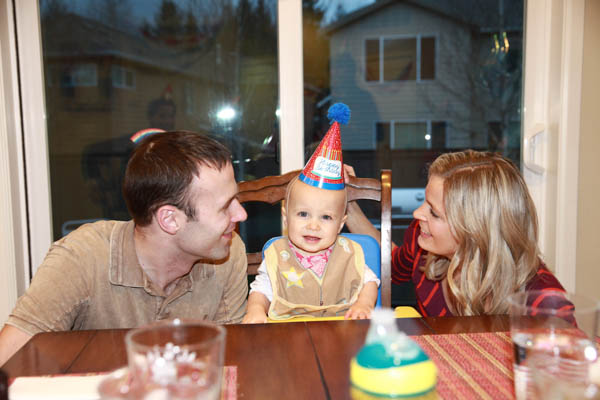 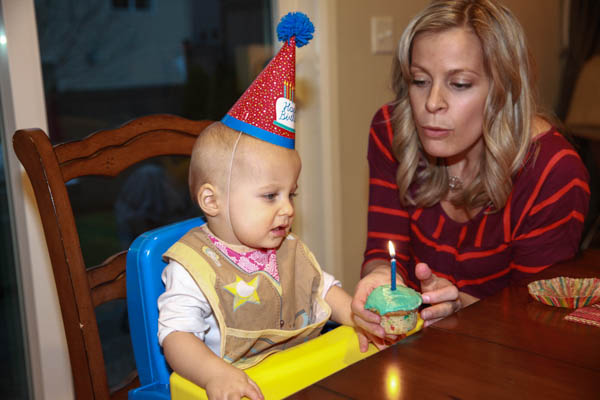 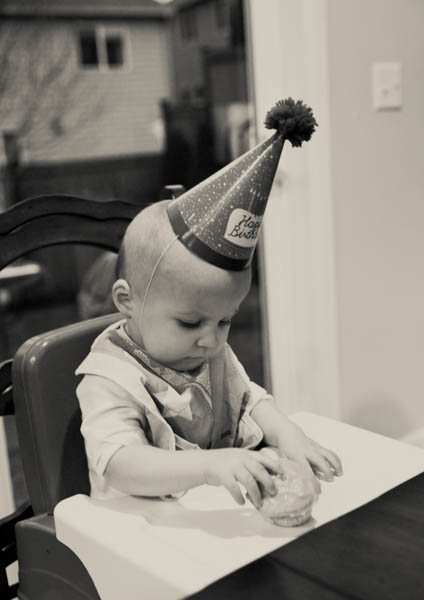 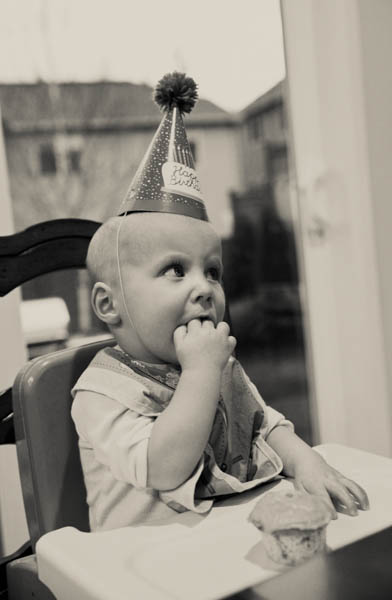 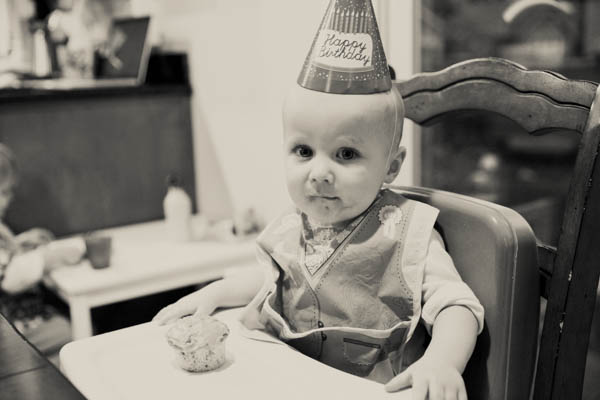 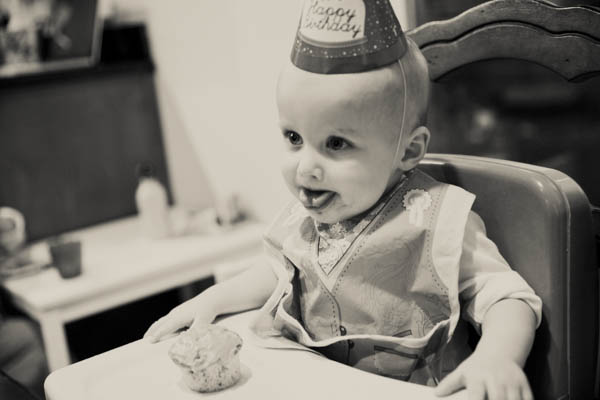 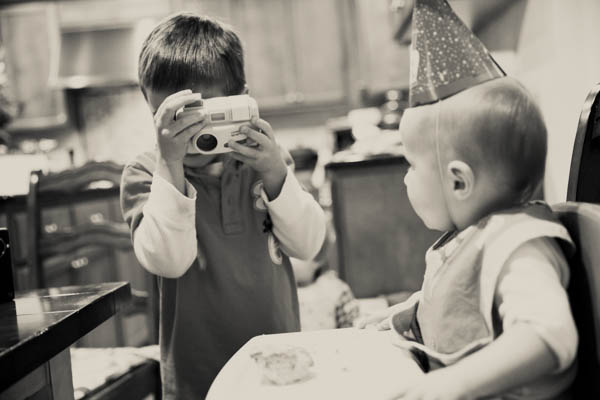 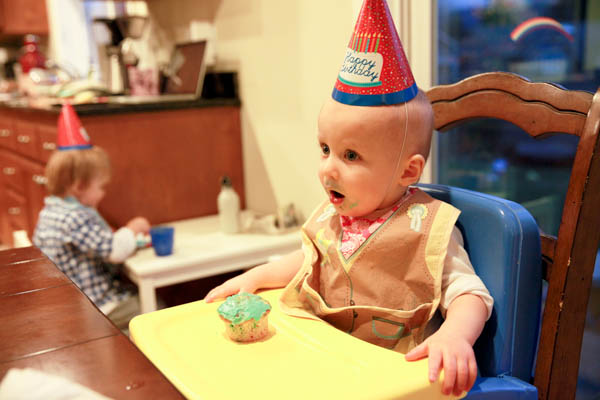 He loves cake! Neither Avery nor Kieron were very interested in their birthday cupcakes, but Silas devoured his. 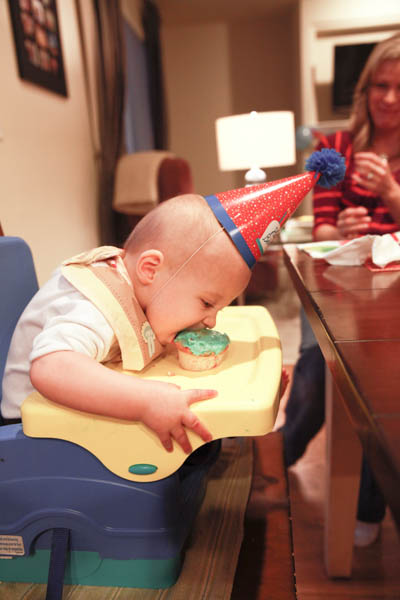 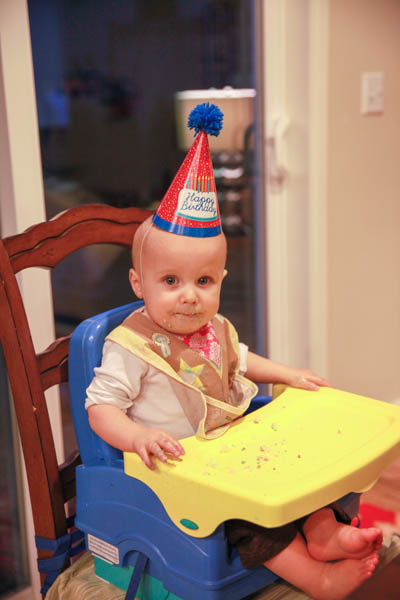 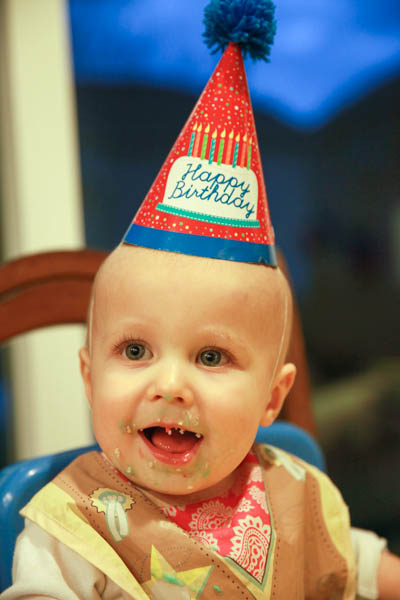 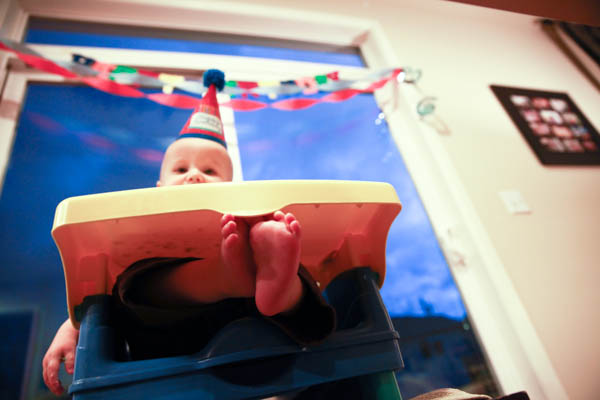 I love how he’s trying to lick the frosting off his lip in this picture. 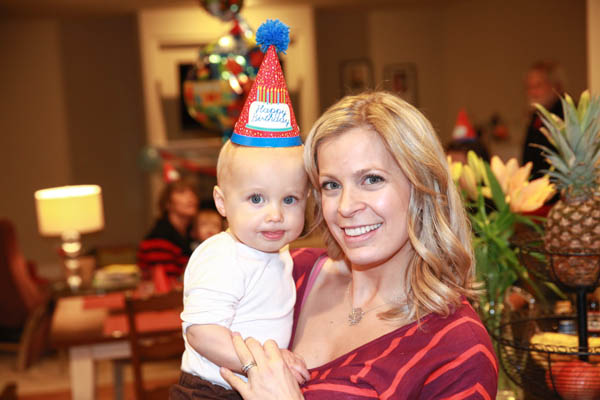 Opening presents with help from his big brothers. It worked out perfectly – each boy found a different toy they were interested in playing with that night! Avery liked the Fisher-Price record player, Kieron gravitated toward the doggie pull-toy, and Silas was content with his float plane and car keys. 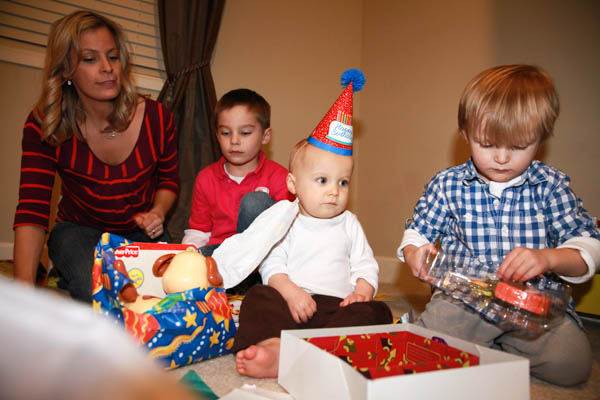